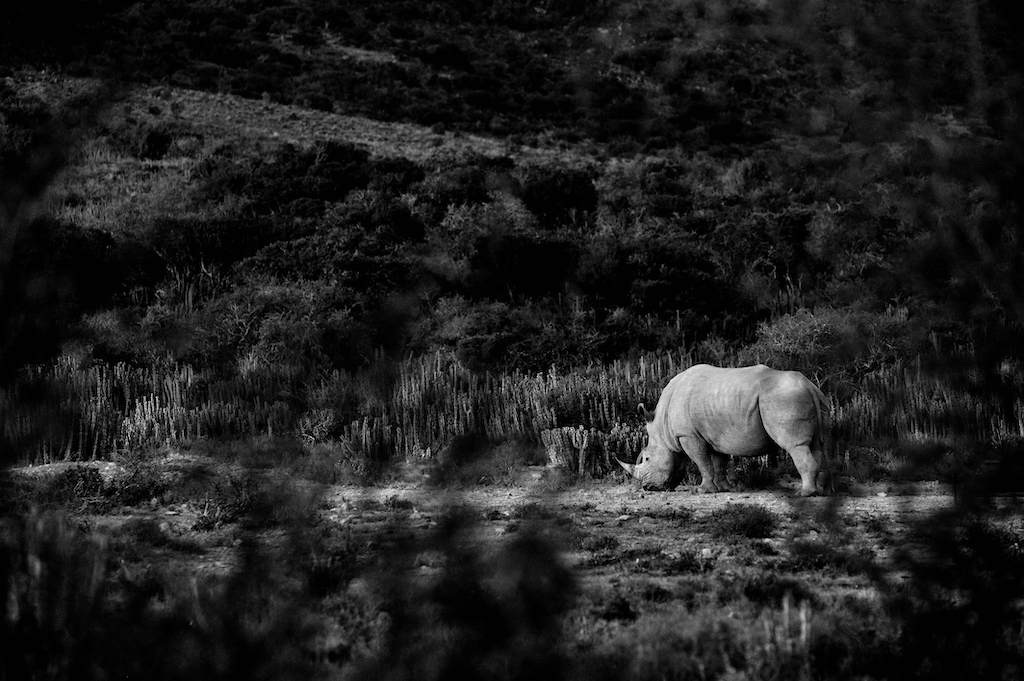 Damian, the Rhino, and The Cactus

A few years ago I was shooting at a game farm (with my camera, duh), my brief was to photograph the lodge, get some landscapes, and a selection of the wildlife on the reserve.

I spent a few days shooting, and having the luxury of time, I could be patient in getting some of the wildlife, as those are not an ‘off the shelf’ kind of picture.

However, we were nearing the end of the shoot, and we had yet to find their elusive Rhino. Apparently the Rhino would walk past the lodge every evening to go to their favourite feeding spot, but since I was there, they must have been on a diet! No Rhinos in sight.

On the very last evening, while enjoying a cold beer on the patio, I spotted a Rhino walking down the game path a few hundred meters away. I called the Ranger to take me to the Rhino in the game vehicle, to which he replied; “just walk down, you’ll be fine….just be very quiet, they may be nearly blind, but their hearing is very sharp”.

I wasn’t going to argue with him, as I was quickly losing light, and I needed the shot, however Damian (he was there for the shoot) volunteered to come with “it should be fun”, he said…

I grabbed my camera, an extra battery, and card (in case) from the bag, and we quickly and quietly made our way down to where the Rhino had stopped to feed…fortunately we were downwind.

We managed to get to about sixty meters (I’m guessing) from the beast, and I clicked off some shots, using a cactus tree as cover.

I needed to be closer.

I asked Damian to wait (while he tapped away on his phone telling the world what we were doing) and I snuck closer to the Rhino, who was still contently munching away. I got really close, I must have been a max of thirty meters away, but felt a lot closer! I took some more images, and made my way quietly back to Damian, never taking my eyes off the Rhino. 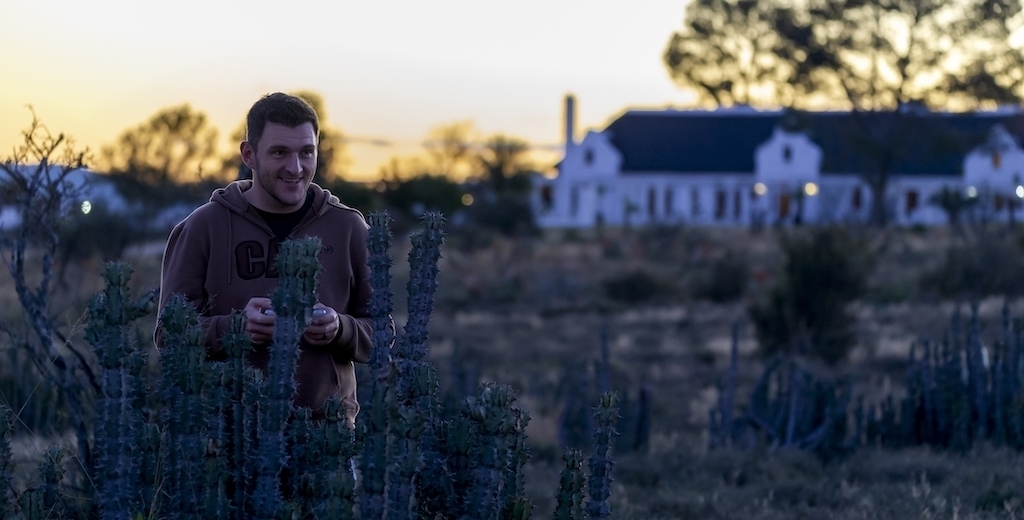 We took a look at the images off the back of the camera, and got excited and talkative about the images. What we failed to remember was that although we knew we had the shots, and could leave, the Rhino did not know that! We looked up, and the beast was facing us and looking rather pissed off. 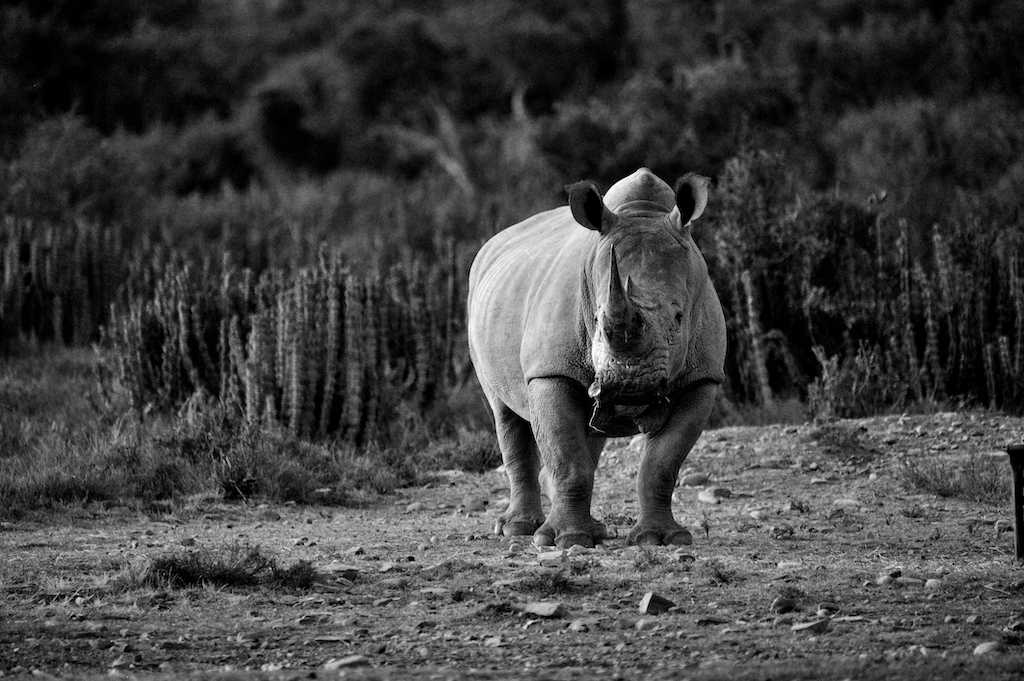 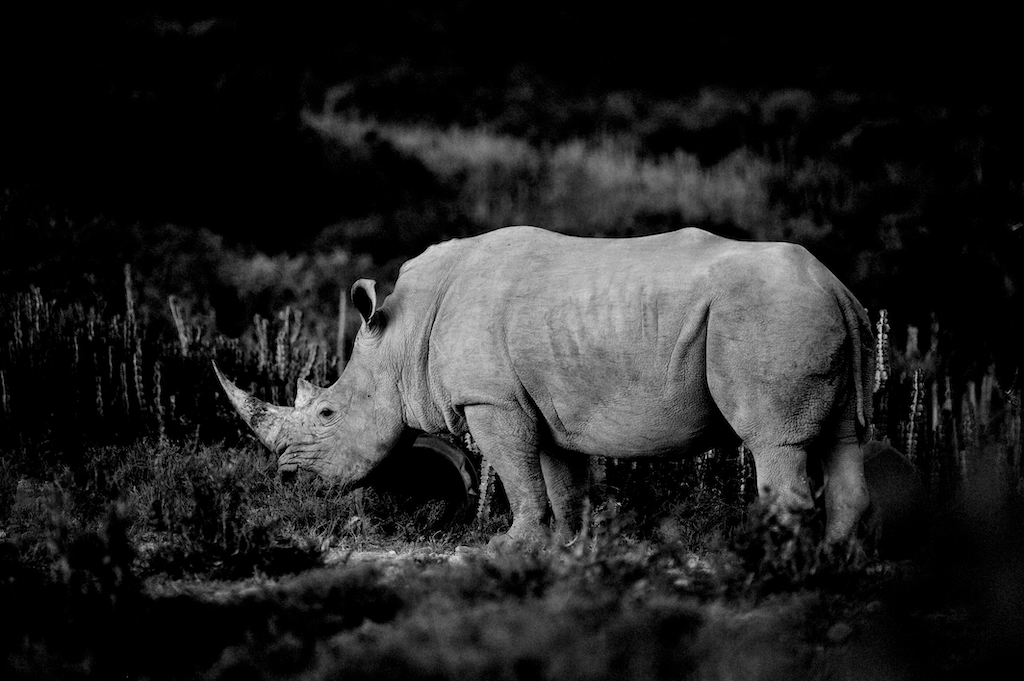 You could hear my sphincter clench at fifty paces.

I whispered to Damian to slowly get down and hide behind the now seemingly tiny Cactus tree, where I joined him.

Eventually I snuck a peak and saw that the Rhino had backed away a bit, but was still agitated.

When we thought it safe, we slowly backed away and made a fast walk back to the lodge in the near dark, where we traded cold beers for hard tack booze.